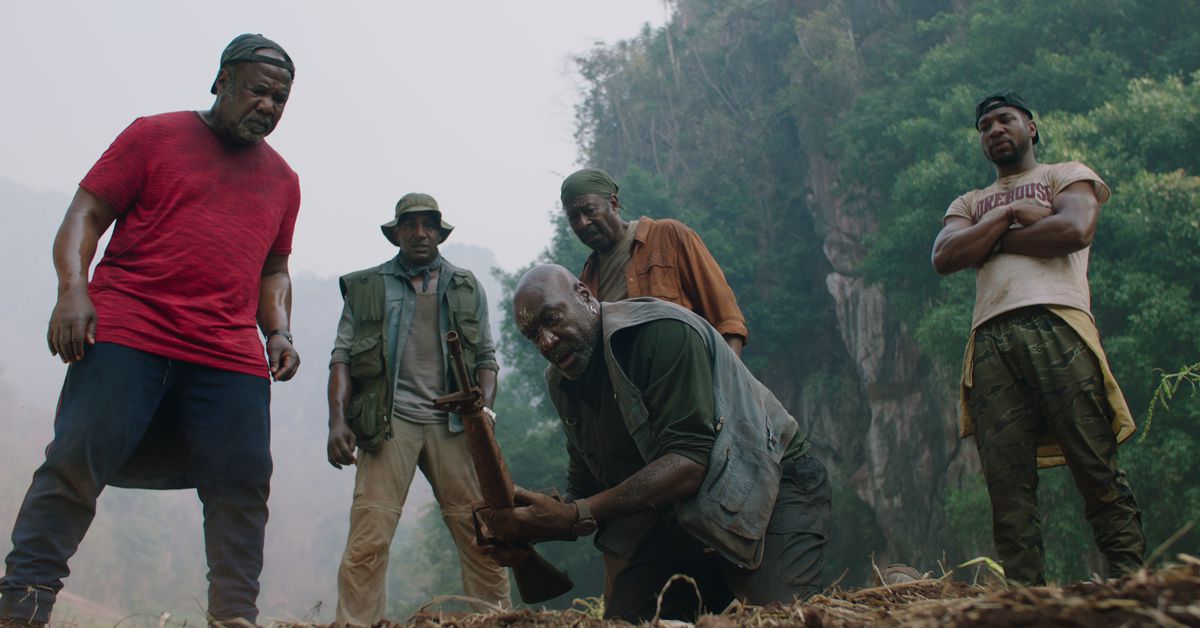 Posted at 19:47h in All Predictions, Oscar, Predictions by Arman Saxena

We’re at the stage in the game where we essentially know what films will be considered. In my view, there are 13 films that have a good chance to get a Best Picture nomination, the ten I put in my predictions and News of the World, Soul, and Sound of Metal. 6 of these films (Nomadland, ‘Trial’, Mank, ‘Ma Rainey’, Minari, and ‘One Night’) I think are essentially locked in for a nomination while the rest will probably shuffle around until nomination morning on March 15th.

I was thinking of leaving out Da 5 Bloods from my nominations this month, but the film has continued to stay relevant in the race due to the enormous attention it has received from the critics’ awards in a variety of categories. It seems this film, even though it was released in June, will be remembered come Oscar nomination morning.

At this point in the race, I think there are only 3 films that can win Best Picture Nomadland, The Trial of the Chicago 7, and Judas and the Black Messiah. The first two have been widely-seen and are generally well-liked by both the critics and public. However, Judas and the Black Messiah has not been seen by the general public but early word is very good and if this movie makes a big impact with critics then this film will shoot up on this list.

This is the first time I have Promising Young Woman in the top 10 and I think it will stay there since due to this category’s use of the preferential ballot, films with a passionate following benefit, which is something this film has in spades.

I’m keeping The Father and News of the World as they are films that will likely appeal to the “old guard” of the Academy but at the same I don’t see as much passion behind them and something like Da 5 Bloods, Soul, or Sound of Metal could easily take up one of their slots.

The Trial of the Chicago 7 (Netflix)

One Night in Miami (Amazon)

Could Jump In: News of the World, Soul, Sound of Metal, Never Rarely Sometimes Always, First Cow, The United States vs Billie Holliday, Malcolm and Marie, On the Rocks, The Prom, Cherry

Chloe Zhao does not look like she can lose this at this point in the race. Something may change but Zhao is the director of a top 3 Best Picture contender and has won essentially all of the critics’ awards so far for Best Director.

To me, Zhao, Fincher, and Sorkin are all but assured a nomination with the bottom two slots being more of a question mark.

Aaron Sorkin – The Trial of the Chicago 7

Regina King – One Night in Miami

Like Zhao in director, there doesn’t seem to be a way that Boseman loses this. His performance has been getting plaudits from everywhere and while he is not far and away the leader in critics’ awards he has won at the ones that are more predictive of success at the Oscars.

I had trouble leaving Yeun out of the top five and if Mank continues to receive a mostly tepid reception from the public and critics’ groups, Oldman might drop out. Ahmed, Boseman, and Lindo are the actors receiving the most attention from the critics’ groups and while I didn’t have Ahmed in here last month his performance (and his film for that matter) is gaining notices.

Carey Mulligan is slowly but surely rising up the ranks as her performance continues to get more and more recognition. She and McDormand are getting most of the attention in this category from critics’ groups, but don’t underestimate Davis who would become only the second-ever Black woman to win in this category (Halle Berry won for Monster’s Ball in 2002).

Zendaya is coming off a surprise Emmy win and her performance in Malcolm and Marie is being praised as one of the best of the year by the critics that have seen the film. That Emmy momentum could propel Zendaya in to the top five but she would likely replace either Kirby or Day.

Vanessa Kirby – Pieces of a Woman

Daniel Kaluuya is getting raves from the few reviews of Judas and the Black Messiah that are out there and I don’t really see him not being a nominee. Odom Jr. and Baron Cohen are definitely his Kaluuya’s main competition in this category and either of these actors playing historical figures could win.

Paul Raci has (by far) won the most critics’ awards in this category and that catapults him into the top five this month. I don’t see him winning because his film is not a frontrunner but it’s definitely a possibility.

Sacha Baron Cohen – The Trial of the Chicago 7

I don’t see anybody outside of my top six listed here getting nominated in this category. However, choosing that one actress that will get left out is difficult. But I’m going to go with Close since her film was widely panned.

Maria Bakalova and Youn Yuh-Jung have won most of the critics’ awards in this category but they both have things working against them. Bakalova’s performance was in a comedy and as purely comedic performances hardly ever get nominated, Bakalova has to work through that barrier.

Ellen Burstyn – Pieces of a Woman

Judas and the Black Messiah

Could Jump In: News of the World, I’m Thinking of Ending Things, Pieces of a Woman, Borat Subsequent Moviefilm, The United States vs. Billie Holiday

Earwig and the Witch

Could Jump In: A Shaun the Sheep Movie: Farmageddon, The Croods: A New Age, Lupin III: The First, Trolls: World Tour, Demon Slayer

The Personal History of David Copperfield

Could Jump In: The Midnight Sky, The Trial of the Chicago 7, One Night in Miami, The Prom, Tenet

Judas and the Black Messiah

Could Jump In: Ma Rainey’s Black Bottom, The Trial of the Chicago 7, One Night in Miami, Da 5 Bloods, The Midnight Sky

The United States vs Billie Holiday

Could Jump In: The Personal History of David Copperfield, News of the World, The Prom, Ammonite, The Trial of the Chicago 7

The United States vs Billie Holiday

Could Jump In: Bill and Ted Face the Music, The Prom, Birds of Prey, Emma., Mulan

Could Jump In: News of the World, The Trial of the Chicago 7, Ma Rainey’s Black Bottom, The Prom, The Invisible Man

Could Jump In: Wonder Woman 1984, Mank, Sonic the Hedgehog, Birds of Prey, The One and Only Ivan

Could Jump In: Tenet, Da 5 Bloods, The Little Things, The Trial of the Chicago 7, Ma Rainey’s Black Bottom

All In: The Fight for Democracy

Could Jump In: The Prom, Trolls: World Tour, Miss Americana, The Outpost, The One and Only Ivan

All In: The Fight For Democracy

Could Jump In: Boys State, Collective, The Truffle Hunters, Welcome to Chechnya, John Lewis: Good Trouble, The Way I See It, MLK/FBI

Night of the Kings

Could Jump In: A Sun, Charlatan, Two of Us, Dear Comrades!, The Auschwitz Report