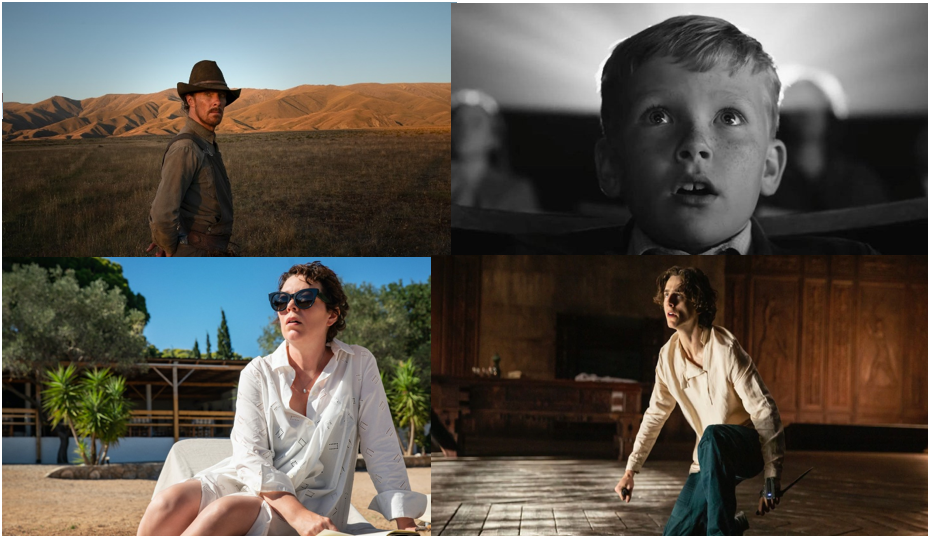 Posted at 15:03h in All Posts, All Predictions, Oscar, Predictions by Arman Saxena

The Power of the Dog and Belfast are still the top contenders after their festival runs and sit significantly higher on this list than the others. That will definitely change as time goes on but both of these films will likely continue to be top 4 Best Picture contenders throughout the season.

Now for the rest of the pack. Even though Dune may not have the critical reception of something like Mad Max Fury Road or Gravity (both of these films had Metascores over 90 while Dune is currently sitting at a 74), there is palpable passion for the film (Guillermo del Toro, Chloe Zhao, and Christopher Nolan have all sung the film’s praises) and the return of the cerebral blockbuster seems to be something that most in the industry have warmly received. I am pretty confident of it getting into Picture (but I highly doubt it has a chance of winning) so it takes the third slot.

Bradley Cooper’s 2021 late-breakers Nightmare Alley and Licorice Pizza take the next two positions and I think Cooper could possibly be double-nominated and maybe even win his first Oscar. Trailers recently dropped for both of these films and Licorice Pizza looks like a major diversion from Paul Thomas Anderson’s more recent work. It looks to be an Almost Famous-lite coming-of-age story that returns to PTA’s San Fernando Valley roots. That’s the kind of film that will likely be more accessible to the Academy than some of the auteur’s past work and if he pulls it off, which is likely for PTA, the 8-time Oscar nominee could possibly receive his first Oscar (Even though he could win for Picture it’s more likely that he wins it for Original Screenplay). Del Toro’s last film was the Best Picture winner The Shape of Water so Nightmare Alley with Cate Blanchett, Bradley Cooper, Rooney Mara, Toni Colette, and Willem Dafoe is highly anticipated. My concern with both Nightmare Alley and Licorice Pizza is that they really could have benefited from a festival run. I highly doubt that a film that didn’t premiere at any of the fall festivals will end up winning Picture as the eventual Picture winner usually premieres at a fall festival and then gradually builds momentum that ends up in the film receiving the most coveted golden statue. Even with the season being extended to March, I don’t see either Nightmare Alley or Licorice Pizza being able to win this but if they deliver, they will be nominated.

I get more skeptical about Don’t Look Up as time goes on but the pedigree it boasts is just much too hard to resist. It’s hard to fathom that a movie with Leo, JLaw, and Meryl in significant roles will not get a Best Picture nomination. If it gets at least a 70 Metascore it’s in undoubtedly. My confidence in West Side Story is also waning but I still have a lot of trust in Spielberg’s popularity in the industry and if the movie is at least mostly positively-received it should probably be able to get into Picture.

King Richard, The Tragedy of Macbeth, and The Lost Daughter round out the last three slots. All three made splashes at festivals and could probably ride those positive notices to BP noms. King Richard is poised to be the Ford v Ferrari of this season. A sports film that audiences might really love that features uniformally great performances from its cast. Both Will Smith and Aunjanue Ellis are likely to receive nods. The Tragedy of Macbeth is led by two of the most respected actors in the industry in Denzel Washington and Frances McDormand and with an 89 Metascore in tow I don’t see how the Academy can deny this film a BP nomination even if it’s not really their cup of tea. It’s probably the Mank or Phantom Thread of this year. Both of those films received nominations in Director so watch out for Joel Coen in that category as it wouldn’t be surprising to see the Director branch reward him for his auteur vision.

The Gotham Awards released their nominations this month and of the films nominated for Best Feature, only Passing and The Lost Daughter look like they have a chance at above-the-line Oscar nominations. Both films are Netflix projects directed by actresses-turned-directors and are based on two highly acclaimed novels. In terms of receiving Oscar nominations, I’m going to give the edge to The Lost Daughter as I understand that it’s more accessible than Hall’s film and since I think it could be like The Father in that it’s a psychological thriller that audiences have a strong emotional response to.

Anyway, here are my predictions for this month:

The Power of the Dog (Netflix)

The Tragedy of Macbeth (A24/Apple+)

Kodi Smit-McPhee – The Power of the Dog

Could Jump In: Being the Ricardos, C’mon C’mon, Parallel Mothers, Mass, Spencer, A Hero, The Worst Person in the World

Could Jump In: CODA, Dune, The Tragedy of Macbeth, The Last Duel, The Humans, tick, tick…Boom!, West Side Story

Could Jump In: Raya the Last Dragon, Sing 2, Ron’s Gone Wrong, The Summit of the Gods, Cryptozoo

Could Jump In: Belfast, Being the Ricardos, The Power of the Dog, The Last Duel, Cyrano, Spencer, Last Night in Soho, Licorice Pizza

The Tragedy of Macbeth (From the trailers alone, this or Spencer is what I want to win here, though both are not too likely. I love the German Expressionism chiaroscuro used here. It’s stunning)

Could Jump In: Spencer (this looks so beautiful, Claire Mathon is so underrated), The French Dispatch, West Side Story, Licorice Pizza, Cyrano, C’mon C’mon, Passing, The Green Knight

Could Jump In: The French Dispatch, The Tragedy of Macbeth, Belfast, Cyrano, House of Gucci, West Side Story

Could Jump In: Nightmare Alley, Licorice Pizza, West Side Story, Being the Ricardos, The Matrix Resurrections, House of Gucci, The Last Duel, The French Dispatch, No Time to Die, The Tragedy of Macbeth

Could Jump In: tick, tick…Boom, Nightmare Alley, The Power of the Dog, Eternals, King Richard, The Last Duel, A Quiet Place Part II

Shang-Chi and the Legend of the Ten Rings

Could Jump In: Godzilla vs. Kong, Free Guy, Nightmare Alley, The Suicide Squad, No Time to Die, Black Widow, The Green Knight

Dune (With the hype this Hans Zimmer score had, the final product is slightly underwhelming but until I hear more of the others I don’t know what can beat it)

The Power of the Dog (I liked this, I don’t know if it’s a winning score but it sounds great)

Spencer (If this film ends up getting a Best Picture nomination, I can see this score winning)

The French Dispatch (Desplat was nominated for Isle of Dogs, Fantastic Mr. Fox, and The Grand Budapest Hotel and I don’t think this is a dip in quality so I think he can get in)

The Worst Person in the World

Could Jump In: Compartment No. 6, Titane, Drive My Car, Leave No Traces, Prayers for the Stolen, Unclenching the Fists, Lamb