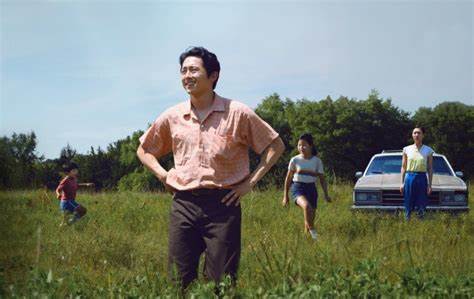 Posted at 05:59h in All Posts, All Predictions, Oscar, Predictions by Arman Saxena

The first six here seemed all but assured for a nomination and I’m pretty sure the first seven will as well but from there on out it is uncertain. One of Sound of Metal, Judas, or News will make it due to PFCS, One of Da 5 Bloods, ‘Judas, and Sound for AFI. One of ‘Sound’, Da 5 Bloods, or News for CCA. In the past 4 years, every film that has been nominated for both CCA and PGA in this category has gone on to be nominated for Best Picture (except for The Big Sick, which didn’t get nominated because the Academy has a bias against pure comedies). Nomadland, The Trial of the Chicago 7, Promising Young Woman, Minari, One Night in Miami, Mank, Ma Rainey’s Black Bottom, and Sound of Metal all fit this criteria this year so I think they all should get in. Judas and the Black Messiah is having a great final push and as it fits the criteria of an Oscar favorite to a T (I think it would be a top 5 contender if it was just released earlier), it will likely jump into the fray. The Father received a BAFTA nomination for Best Film, but it just doesn’t seem to be getting the support of the guilds which are so important in being successful here.

This one is really between 7 people: Chloe Zhao, David Fincher, Aaron Sorkin, Emerald Fennell, Regina King, Lee Isaac Chung, and Spike Lee. Zhao seems like the only nominee who is locked in for a nomination as I could see any one of the others being forgotten on nomination day. Every day Minari’s stock rises and seems more and more like a top three Best Picture contender and if that is the case, Chung will definitely get in. Fennell’s Promising Young Woman could also be a top 3 contender but since her and Sorkin’s films are more screenplay-driven, I could see either of them missing here like Peter Farrelly did for Green Book two years ago. Fincher is likely only getting this nomination on the strength of his legacy as Mank seems to be faltering somewhat. Regina King and Spike Lee could also definitely get in as well. This category is prone to surprises and that usually comes in the form of the director of a serious period drama that the below-the line groups love. So watch out for Spike Lee or Paul Greengrass to surprise.

The first three here are locked for nominations while I think the last two spots could realistically only be filled by two of three people, Steven Yeun, Gary Oldman, or Delroy Lindo. Oldman has had nods at three of the spotlighted precursors, but Mank seems very vulnerable right now. Steven Yeun got two important precursors but surprisingly didn’t get BAFTA even though his film got a lot of love in the other jury-nominated categories like Supporting Actress, Supporting Actor, and Director. I thought Lindo would get BAFTA and catapult himself to an Oscar nomination with a nomination there, but, even though the man is British and we saw vast diversity in the nominations, he still didn’t get a nom at the BAFTAs. I am going to put Oldman here but something tells me that Lindo will replace him on nominations morning.

This one seems airtight and I really don’t think anybody else has enough momentum to join in here.

Kaluuya, Cohen, and Odom Jr. are all locked for a nomination here and I think that Raci is as well. The fifth slot is really the only question mark. I think the last slot is between Bill Murray, Chadwick Boseman, and Mark Rylance. Rylance could get in out of the Academy’s love for The Trial of the Chicago 7. Bill Murray could get in as the Oscars do often give nominations to older veterans (Tom Hanks last year and Christopher Plummer three years ago) who end up being their film’s one and only nomination. And Boseman could get in on the strength of his performance in Ma Rainey’s Black Bottom and on the outpouring of love for the late star. If neither Murray nor Boseman get in, it will be Rylance.

Could Jump In: Bill Murray – On the Rocks – CCA, GG, Mark Rylance – The Trial of the Chicago 7, Jared Leto – The Little Things – GG, SAG

This is one of the weirder categories as only one actress here (Maria Bakalova) has received nominations from the four main organizations and that too for a performance in a comedy. That said, she definitely deserves all of this recognition and is probably the only person that I think is locked for a nomination. Both Youn Yuh-jung and Olivia Colman are pretty much locked and while Close has received the same nominations as Colman she also received a nomination for Worst Supporting Actress at the Razzies so I am not sure if she will be nominated. Seyfried is slowly falling along with her film but I think she should still have enough strength to hold on to a position here. Foster’s surprise win at the Globes may turn out to be unsuccessful in creating an Oscar nom but her popularity in Hollywood coupled with the fact that this is her first major performance in at least seven years (excepting Hotel Artemis which most people do) should push her to a nomination here.

Both Mank and Minari were ineligible for nominations at WGA, so there exclusions there are not concerning. The first three I have here I think are locked while the next three slots could be filled by Sound of Metal, Mank, or Judas and the Black Messiah. Mank seems to be falling but it did receive a BAFTA nomination here so I think it should be fine. Sound of Metal is about language itself so it should be especially appealing and would be a great way to give ‘Blue Valentine’ writer Derek Cianfrance his first Oscar nomination.

The first four here seem essentially locked but there are four films that are realistically vying for the last slot. I am going to go with The White Tiger as it has quietly surged and received a couple of BAFTA nominations. But I could see it very possibly going to First Cow, Borat Subsequent Moviefilm, or News of the World. First Cow since no film that has won the New York Film Critics Circle’s Best Film award has ever been completely shut out at the Oscars, Borat Subsequent Moviefilm because of its overt political commentary, and News of the World since it has the highest chance of being nominated for Best Picture among the four films.

The first three are definitely locked and I am pretty confident about including Over the Moon and The Croods: A New Age but The Willoughbys could surprise and enter the fold.

The Croods: A New Age

Could Jump In: The Willoughbys

The top 3 here Mank, News of the World, and Ma Rainey’s Black Bottom seem locked here. Both Mank and News of the World have received nominations from BAFTA, the Art Directors Guild, and the Critics Choice Awards. Ma Rainey’s Black Bottom received noms from both the CCA and the ADG. Tenet did as well, but this category does not nominate contemporary films nearly as much as they do period films so I don’t think it’s locked.

The Trial of the Chicago 7 – ADG

Nomadland, Mank, and News of the World seem locked here. ASC has the best historical track record here and in the past ten years they have always gotten either 4 or 5 of their picks in the Oscar nominee slate. Since The Trial of the Chicago 7 is a much bigger Oscar contender then Cherry is, I put the former in. Now, the last slot. Personally, I believe that it could really only go to Minari, Tenet, or Judas and the Black Messiah. I am going to go with Minari because it seems like it has widespread industry support. However, I could probably say the same thing about ‘Judas’ and I would be the least bit surprised if it showed up in a bunch of categories on Monday morning. Also, don’t count out First Cow as the Academy might want to award the critical favorite somewhere and as its chances at an Adapted Screenplay nomination are dwindling this may be the place that at lands.

The Trial of the Chicago 7 – ASC

Period films almost always fully occupy this category and that is probably the most important thing to keep in mind here. Ma Rainey’s Black Bottom, Mank, and Emma. are all locked for nominations here and Mulan seems well in place as well. I am going to choose Ammonite to fill the last spot here since it is a period piece and BAFTA has a really good track record in this category.

Could Jump In: News of the World, Promising Young Woman – CCA, CDG, The Glorias, The Personal History of David Copperfield – CCA

The Trial of the Chicago 7 – BAFTA, CCA, ACE

Could Jump In: Emma. – CCA, The Glorias, Jingle Jangle: A Christmas Journey – MUAH

Could Jump In: Nomadland – BAFTA, MPSE, Tenet – MPSE, The Trial of the Chicago 7 – CAS, MPSE, The Midnight Sky – MPSE

My instincts are telling me to put in Birds of Prey instead of Welcome to Chechnya here but I just can’t bring myself to do it since it did not get any nominations from the Visual Effects Society.

The One and Only Ivan – BAFTA, VES

Could Jump In: Tenet, The Little Things

All In: The Fight for Democracy – HMMA

Another Round – GG, BAFTA, CCA

Night of the Kings

Could Jump In: The Truffle Hunters – DGA, PGA, IDA, Boys State – CEH, DGA, All In: The Fight for Democracy, My Octopus Teacher – BAFTA, CCA

A Love Song for Latasha

A Concerto is a Conversation

Abortion Helpline, This is Lisa

If Anything Happens I Love You