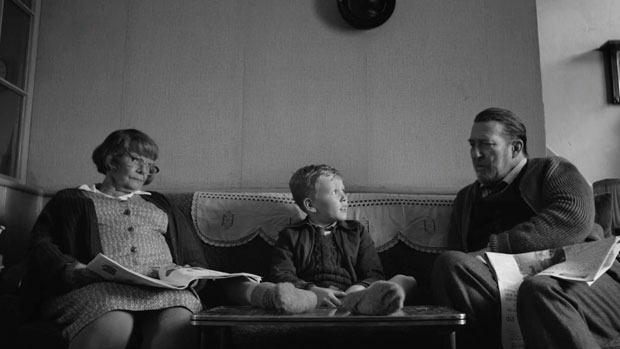 Posted at 17:33h in all editorial posts, All Posts, Lists, News, and Other Editorials by Arman Saxena

Now that the BFCA and the HFPA have announced the nominations for their respective awards, there are multiple races that become increasingly clear.

As I said in the post announcing the Critics’ Choice nominations, “there are now 12 films that I think have a chance at a Best Picture nomination as they hit at least one of AFI, Golden Globes, or Critics Choice: Belfast, CODA, Cyrano, Don’t Look Up, Dune, King Richard, Licorice Pizza, Nightmare Alley, The Power of the Dog, tick, tick…Boom!, The Tragedy of Macbeth, and West Side Story.”

Of those 12 films, there is no way Cyrano is getting a Best Picture nomination so that’s out. The slot for the last exclusion, I think, is between tick, tick…Boom!, The Tragedy of Macbeth, Nightmare Alley, and CODA. Who I choose as for the 11th slot will likely fluctuate as the season goes on. Right now I have The Tragedy of Macbeth missing. Even though its stars two of the most beloved actors working today in Denzel Washington and Frances McDormand and has an 89 Metascore, there doesn’t seem to be much passion for it. It isn’t showing up on too many best of 2021 critics lists and isn’t getting too many best picture nominations at critics’ awards either. If it starts picking up more steam once it has a proper release around Christmas I’ll slot it in, but right now I’m going to keep it out.

Kenneth Branagh, Jane Campion, Steven Spielberg, and Denis Villeneuve all made it into both Critics Choice and the Golden Globes, yet to me, only the last three directors are locked for an Oscar nod. In the last four years, six directors, Regina King, Aaron Sorkin, Peter Farrelly, Bradley Cooper, Martin McDonagh, and Steven Spielberg, all missed Director nods at the Oscars after hitting both Critics Choice and the Golden Globes. I think Kenneth Branagh and Belfast would fit pretty well into this group. Paul Thomas Anderson will probably take the 4th slot and I’m going to be watching for BAFTA to see who’ll take the last slot but it could be Hamaguchi, Larrain, Ducournau, or someone completely different. Also, I think Campion is most definitely the frontrunner to win this.

Benedict Cumberbatch, Peter Dinklage, Andrew Garfield, Will Smith, and Denzel Washington all received nominations from both groups. I think Cumberbatch, Garfield, Smith, and Washington will all get nominated for their work but Dinklage in Cyrano doesn’t really seem like something that the Oscar will take to and I think Javier Bardem in Being the Ricardos or Leonardo DiCaprio in Don’t Look Up (both received Golden Globe nods) are more likely nominees. This seems to be between Cumberbatch and Smith for the top prize and unless something drastic occurs, Cumberbatch has both the visibility (he has a major role in what will be this year’s biggest box-office hit: Spider-Man: No Way Home) and the plaudits from the critics’ groups to take the win.

In the last four years years, all five eventual Oscar Best Actress nominees were chosen at Critics Choice. This year’s nominees are Jessica Chastain, Olivia Colman, Lady Gaga, Alana Haim, Nicole Kidman, and Kristen Stewart. All of these women received a Golden Globes nomination as well and four or five of them will be nominated for an Oscar this year. SAG will help us narrow it down but right now the top 5 is definitely Stewart, Colman, Kidman, Gaga, and Chastain. Chastain’s film has probably been forgotten by now and she might not have enough steam to get a nomination in February, and in the event of that happening someone from a stronger Best Picture contender like Rachel Zegler or Alana Haim can take her spot.

In terms of the win, Stewart is the frontrunner at the critics’ awards right now. Her biggest competition at the Oscars seems to be Kidman at the moment, yet Kidman still hasn’t won one critics’ award. She still has a lot of time and if she racks up a handful I think she can win this but if not, Stewart has this in the bag.

Jamie Dornan, Ciaran Hinds, Troy Kotsur, and Kodi Smit-McPhee all made both Critics’ Choice and the Golden Globes. I think all four of these men will make it to the Oscars with the inclusion of either Licorice Pizza’s Bradley Cooper or The Power of the Dog’s Jesse Plemons as the fifth pick.

Of the categories I have discussed so far, this one seems the most up-in-the-air when it comes to who I think will win. At the critics’ awards, Smit-McPhee is the clear frontrunner though I do think he might not be well-established enough and his work might be too subtle for the Academy’s tastes (I personally believe his performance was fantastic, by the way). I think Ciaran Hinds’ work in Belfast fits the more traditional winner in this category and he is my current pick to win though Troy Kotsur is definitely a dark horse.

Caitrona Balfe, Ariana DeBose, Kirsten Dunst, and Aunjanue Ellis all made both Critics’ Choice and the Golden Globes and I think all of them will be nominated at the Oscars. The question is who will be that last slot? I think it’s between Ruth Negga for Passing and Rita Moreno for West Side Story. I think if Negga continue to pick up critics’ awards she might drum up enough visibility for her to get the nomination but if West Side Story overperforms on nomination morning, Moreno is coming with it.

For me, the contenders for the win are DeBose, Dunst, and Balfe. I think I’m leaning towards DeBose at it seems like she has a lot of momentum at this point in the race.

Licorice Pizza, Belfast, Don’t Look Up, and Being the Ricardos all hit both Critics Choice and the Golden Globes yet I think Being the Ricardos will miss at the Oscars. This has already happened twice for Sorkin as he was nominated at both Critics’ Choice and the Golden Globes for both Charlie Wilson’s War and Steve Jobs (He actually won at the Globes for this) yet ended up failing to be nominated at the Oscars.

For those last two slots, I think its going to come down to King Richard, C’mon C’mon, or The French Dispatch. I think King Richard will get in on account of it being a Best Picture nominee but the last slot is more tricky. Everybody loves Wes Anderson so this may be the place where they might give him a nod here but C’mon C’mon is a movie that seems to be well-liked by everybody and it may become a surprise nominee here. It’s not something that Mike Mills is new to as his last film 20th Century Women also received its only Oscar nomination in Original Screenplay.

For the win, this is between Licorice Pizza and Belfast. I think Paul Thomas Anderson (deservedly) has a very strong overdue narrative here and Licorice Pizza is his biggest Oscar contender since There Will Be Blood so there’s a very strong case for him winning. But watch out for Belfast because if it ends up being the Best Picture winner it will essentially have to win here as well.

The Power of the Dog is the only film that hit both awards bodies and is pretty much locked for a win in this category. The Lost Daughter, CODA, West Side Story, and Drive My Car are my picks for the last four slots though something like Dune, Nightmare Alley, or tick, tick…BOOM! could also be nominated. We’ll have to wait for BAFTA, WGA, and USC Scripter to make more informed conclusions about what will be nominated.