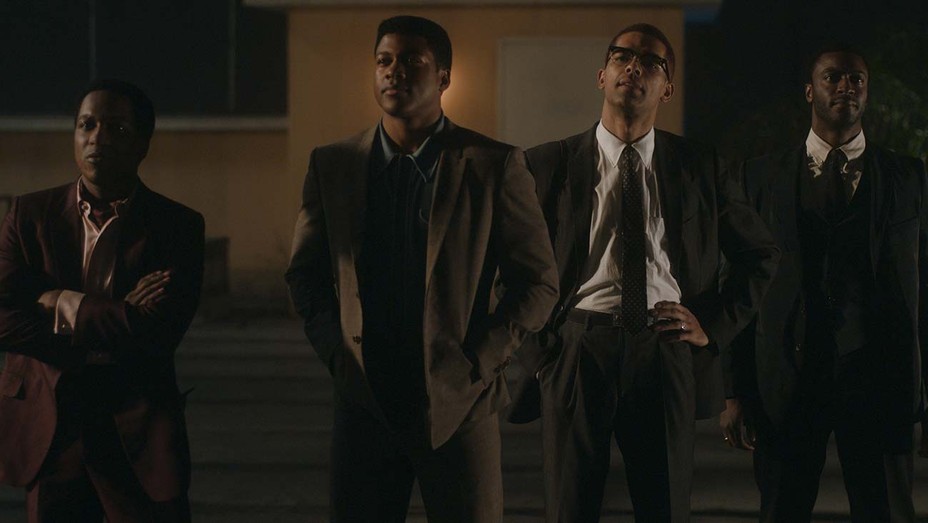 Posted at 01:53h in all editorial posts, News by Arman Saxena

The film that has created the biggest noise at the Venice International Film Festival so far has been Regina King’s directorial debut, One Night in Miami and, based on the reviews released so far, it will likely be a Top 5 Best Picture contender.

Regina King’s directorial debut starring Kingsley Ben-Adir, Eli Goree, Aldis Hodge, Leslie Odom Jr. is “set on the night of February 25, 1964… [and] follows a young, brash Cassius Clay (Eli Goree) as he emerges from the Miami Beach Convention Center the new Heavyweight Boxing Champion of the World. Against all odds, he defeated Sonny Liston (Aaron D. Alexander) and shocked the sports world. While crowds of people swarm Miami Beach to celebrate the match, Clay – unable to stay on the island because of Jim Crow-era segregation laws – spends the evening at the Hampton House Motel in Miami’s African American Overtown neighborhood celebrating with three of his closest friends: Malcolm X (Kingsley Ben-Adir), Sam Cooke (Leslie Odom Jr.), and Jim Brown (Aldis Hodge). During this historic evening, these icons, who each were the very representation of the Pre-Black Power Movement and felt the social pressure their cross-over celebrity brought, shared their thoughts with each other about their responsibilities as influencers, standing up, defending their rights and moving the country forward to equality and empowerment for all black people. The next morning, the four men emerge determined to define a new world for themselves and their community.” (From IMDb).

The film seems perfectly timed for the current moment in America and the Academy has been leaning toward relevant (or what they think is relevant) films in years past as shown by their picks for (2015’s Spotlight, 2016’s Moonlight, 2018’s Green Book, 2019’s Parasite) Best Picture. The Academy also leans toward films that are set in the past (in the last 3 years, six of the Best Picture nominees each year were not set in current day), which is another box that King’s film checks. Another prerequisite that a film must pass before reaching Oscar glory is being accessible to wide audiences and according to Jonathan Romney’s review for the Guardian, the film is “immensely watchable”, which is exactly what a film needs to be to win Best Picture.

From this information the film is definitely a top 5 Best Picture contender, the question is, where else will it be nominated? As the film starts from Cassius Clay’s perspective, it is likely that Eli Goree will be submitted for Best Actor, while the rest of the ensemble will probably be entered in for Best Supporting Actor. From the reviews I have read, it seems that while all the performances are great, Kingsley Ben-Adir’s portrayal of Malcolm X is the standout. He is a relative newcomer so this will likely be his breakout role.

Kemp Powers’ screenplay (adapted from his own play) has also been praised and he could receive two writing nominations this year as he also co-wrote (and co-directed) the screenplay for Pixar’s Soul. The last person to be nominated in both Adapted and Original Screenplay in the same year was Francis Ford Coppola in 1974 for the Godfather Part II and The Conversation (he won for the Godfather sequel).

In the below-the-line categories critics have lauded Tariq Anwar’s editing (he is a two-time Oscar nominee for American Beauty and The King’s Speech), Tami Reiker’s cinematography, Page Buckner’s production design, and Terence Blanchard’s jazz-infused score (he is a one-time Oscar nominee for BlacKkKlansman and also created the score for this year’s Da 5 Bloods).

While this news came out after I published my September predictions, check those out here!