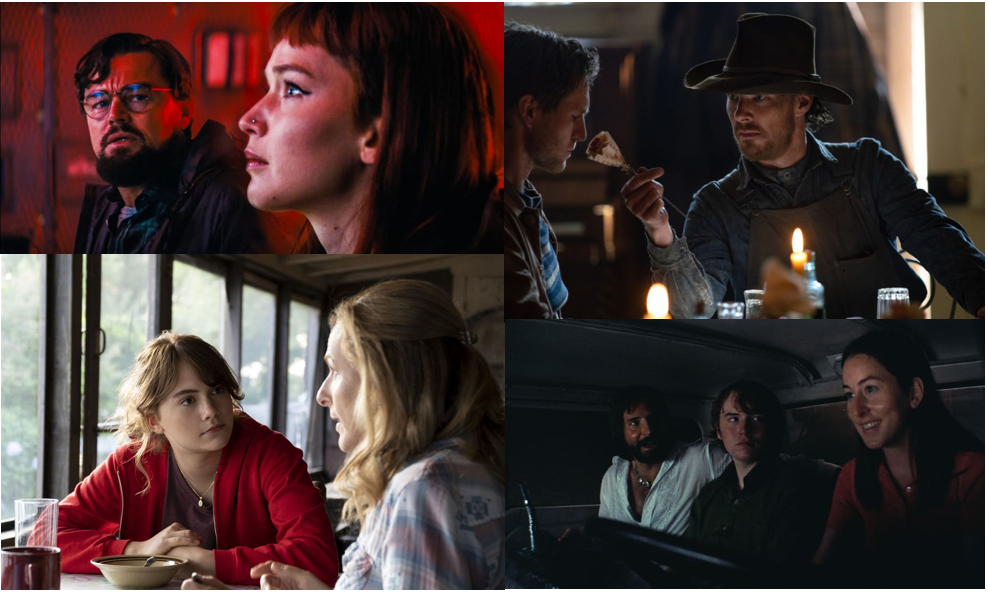 Posted at 06:46h in All Posts, All Predictions, Oscar, Predictions by Arman Saxena

At this point, I believe that we can already limit the films that have a chance of winning Best Picture to a film with an 86+ Metascore or Belfast. So among the 21 films listed below, which are the only films I think have a chance at a Best Picture nomination at this point, only The Power of the Dog (88), Licorice Pizza (94), The Lost Daughter (88), The Tragedy of Macbeth (89), Parallel Mothers (86), Flee (88) have an 86+ Metascore. And to further shrink the pool, the only films that seem like they can win Best Picture at this point are The Power of the Dog, Licorice Pizza, and Belfast.

The reviews for Paul Thomas Anderson’s Licorice Pizza came out and its received more acclaim than almost any other movie this year so far. It won best film at NBR and won Best Screenplay at NYFCC. However, I think it will end up like Quentin Tarantino’s Once Upon a Time in Hollywood: a critics’ favorite from one of the most respected directors working today that transports its audience to a bygone era of Hollywood’s history. However, I think, like Once Upon a Time in Hollywood, some will think Anderson’s film overlong and slightly problematic (with the age-gap and a scene with a racist Japanese restaurant owner). However, with the acclaim its getting, it’s indisputably in the conversation and I really hope the overdue Anderson gets his first (HOW?!) Oscar.

West Side Story is also getting fantastic reviews and I’m happy that I trusted Spielberg and kept the film in my line-up throughout the year. It’s a remake of one of the most acclaimed musicals ever put on screen and with Spielberg at the helm the film really leans into that Old Hollywood feel. It’s the kind of film that the old guard of the Academy would love and with the social commentary present, it’s one that the newer generation will probably get behind as well.

The Power of the Dog (Netflix)

Campion, Spielberg, PTA, and Villeneuve are all essentially locked here. The question is who will take the fifth spot? I had Del Toro but with the good not great reviews for Nightmare Alley, I’m less sure of its chances across the board. So for me that leaves Coen and Branagh. The director branch is very favorable of auteurs so I think Branagh’s film is one that will be a top 5 contender in Picture but won’t get in Director. Coen’s work in ‘Macbeth’ could be rewarded but unless the film sees a slight surge in attention it will drop out of my Picture predictions and here as well. And then there are the auteurs like Hamaguchi, Larrain, Farhadi, and Almodovar. With the acclaim that these directors have, I definitely could see one of them taking that fifth slot, though BAFTA will likely make that much clearer.

Benedict Cumberbatch, Peter Dinklage, Andrew Garfield, Will Smith, and Denzel Washington all received nominations from both groups. I think Cumberbatch, Garfield, Smith, and Washington will all get nominated for their work but Dinklage in Cyrano doesn’t really seem like something that the Oscar will take to and I think Javier Bardem in Being the Ricardos or Leonardo DiCaprio in Don’t Look Up (both received Golden Globe nods) are more likely nominees. This seems to be between Cumberbatch and Smith for the top prize and unless something drastic occurs, Cumberbatch has both the visibility (he has a major role in what will be this year’s biggest box-office hit: Spider-Man: No Way Home) and the plaudits from the critics’ groups to take the win.

In the last four years years, all five eventual Oscar Best Actress nominees were chosen at Critics Choice. This year’s nominees are Jessica Chastain, Olivia Colman, Lady Gaga, Alana Haim, Nicole Kidman, and Kristen Stewart. All of these women received a Golden Globes nomination as well and four or five of them will be nominated for an Oscar this year. SAG will help us narrow it down but right now the top 5 is definitely Stewart, Colman, Kidman, Gaga, and Chastain. Chastain’s film has probably been forgotten by now and she might not have enough steam to get a nomination in February, and in the event of that happening someone from a stronger Best Picture contender like Rachel Zegler or Alana Haim can take her spot.

In terms of the win, Stewart is the frontrunner at the critics’ awards right now. Her biggest competition at the Oscars seems to be Kidman at the moment, yet Kidman still hasn’t won one critics’ award. She still has a lot of time and if she racks up a handful I think she can win this but if not, Stewart has this in the bag.

Jamie Dornan, Ciaran Hinds, Troy Kotsur, and Kodi Smit-McPhee all made both Critics’ Choice and the Golden Globes. I think all four of these men will make it to the Oscars with the inclusion of either Licorice Pizza’s Bradley Cooper or The Power of the Dog’s Jesse Plemons as the fifth pick.

Of the categories I have discussed so far, this one seems the most up-in-the-air when it comes to who I think will win. At the critics’ awards, Smit-McPhee is the clear frontrunner though I do think he might not be well-established enough and his work might be too subtle for the Academy’s tastes (I personally believe his performance was fantastic). I think Ciaran Hinds’ work in Belfast fits the more traditional winner in this category and he is my current pick to win though Troy Kotsur is definitely a dark horse.

Kodi Smit-McPhee – The Power of the Dog

Caitrona Balfe, Ariana DeBose, Kirsten Dunst, and Aunjanue Ellis all made both Critics’ Choice and the Golden Globes and I think all of them will be nominated at the Oscars. The question is who will be that last slot? I think it’s between Ruth Negga for Passing and Rita Moreno for West Side Story. I think if Negga continue to pick up critics’ awards she might drum up enough visibility for her to get the nomination but if West Side Story overperforms on nomination morning, Moreno is coming with it.

For me, the contenders for the win are DeBose, Dunst, and Balfe. I think I’m leaning towards DeBose at it seems like she has a lot of momentum at this point in the race.

Licorice Pizza, Belfast, Don’t Look Up, and Being the Ricardos all hit both Critics Choice and the Golden Globes yet I think Being the Ricardos will miss at the Oscars. This has already happened twice for Sorkin as he was nominated at both Critics’ Choice and the Golden Globes for both Charlie Wilson’s War and Steve Jobs (He actually won at the Globes for this) yet ended up failing to be nominated at the Oscars.

For those last two slots, I think its going to come down to King Richard, C’mon C’mon, or The French Dispatch. I think King Richard will get in on account of it being a Best Picture nominee but the last slot is more tricky. Everybody loves Wes Anderson so this may be the place where they might give him a nod here but C’mon C’mon is a movie that seems to be well-liked by everybody and it may become a surprise nominee here. It’s not something that Mike Mills is new to as his last film 20th Century Women also received its only Oscar nomination in Original Screenplay.

For the win, this is between Licorice Pizza and Belfast. I think Paul Thomas Anderson (deservedly) has a very strong overdue narrative here and Licorice Pizza is his biggest Oscar contender since There Will Be Blood so there’s a very strong case for him winning. But watch out for Belfast because if it ends up being the Best Picture winner it will essentially have to win here as well.

Could Jump In: Being the Ricardos, C’mon C’mon, Mass, Parallel Mothers, The Worst Person in the World, A Hero, Red Rocket

The Power of the Dog is the only film that hit both awards bodies and is pretty much locked for a win in this category. The Lost Daughter, CODA, West Side Story, and Drive My Car are my picks for the last four slots though something like Dune, Nightmare Alley, or tick, tick…BOOM! could also be nominated. We’ll have to wait for BAFTA, WGA, and USC Scripter to make more informed conclusions about what will be nominated.

Could Jump In: Passing,

Could Jump In: Raya and the Last Dragon, The Summit of the Gods, Sing 2,

Could Jump In: Cyrano, The Power of the Dog, The Tragedy of Macbeth, Being the Ricardos, The Last Duel

Could Jump In: Cruella, Belfast, The French Dispatch, Being the Ricardos, House of Gucci

Could Jump In: Don’t Look Up, No Time to Die, Licorice Pizza, tick, tick, Boom!, Spider-Man: No Way Home

Could Jump In: Coming 2 America, Nightmare Alley, The Suicide Squad, West Side Story, No Time to Die

Could Jump In: The Power of the Dog, A Quiet Place: Part II, Spider-Man: No Way Home

Could Jump In: Shang Chi and the Legend of the Ten Rings, Ghostbusters: Afterlife. Free Guy, No Time to Die, Black Widow

Could Jump In: Don’t Look Up, Encanto, The Tragedy of Macbeth, No Time to Die, Being the Ricardos

Though Van Morrison’s been especially controversial lately, he’s also a much-revered artist and Academy members not in the know about his anti-lockdown rhetoric may just know “Astral Weeks” and “Moondance” and vote for him here. There’s no way he’s winning but he may just sneak in for a nomination.

Could Jump In: CODA, Respect, The Harder They Fall, Annette, Bruised

The Worst Person in the World

Could Jump In: Compartment No. 6, I’m Your Man, Lamb, The Good Boss, The Falls

The Academy is not very supportive of documentaries based on archival footage and therefore I’m predicting Summer of Soul, the frontrunner in this category, to get snubbed.

Could Jump In: Summer of Soul, In the Same Breath, Procession, Attica, Writing With Fire