Retrospective - It's a Wonderful Life: One of the Saddest Christmas Films Ever Made | Awards Insights
16749
post-template-default,single,single-post,postid-16749,single-format-standard,qode-quick-links-1.0,ajax_fade,page_not_loaded,,qode-theme-ver-11.0,qode-theme-bridge,wpb-js-composer js-comp-ver-5.1.1,vc_responsive

Retrospective – It’s a Wonderful Life: One of the Saddest Christmas Films Ever Made

30 Dec Retrospective – It’s a Wonderful Life: One of the Saddest Christmas Films Ever Made

Posted at 06:57h in all editorial posts, All Posts, Lists, News, and Other Editorials, Others by Arman Saxena

It’s the holiday season. Tis’ the time to spend with our families, watching movies to brighten our lives with joy and cheer. Frank Capra’s It’s a Wonderful Life has cemented its place as a popular pick during this time-honored tradition of Christmas-time movie watching. My family and many others watch the film every year on Christmas Day and as the film reaches its 75th anniversary, let’s take a look at what makes this film so special.

Uplifting. That’s a word that’s commonly associated with Capra’s film (and many more of his films). It was ranked at the top of AFI’s 100 Cheers List, making it their pick for the most inspiring film of all time. I agree. You won’t find a more life-affirming film but to uplift its audience as much as it does the film first has to also bring them down.

It’s a Wonderful Life is easily one of the saddest Christmas films ever made. It actually underperformed at the box office on release, which was likely due to it dealing heavily with the Great Depression and American hardship. It found its audience on television when it entered the public domain and became the Christmas staple that we know it as today.

The film introduces us to its protagonist George Bailey as a kid with dreams of traveling the world, whether it’s to Europe or Tahiti. As he grows into Jimmy Stewart, those dreams are still intact though not for long. For George Bailey, no good deed goes unpunished. On the day before his long-awaited trip to Europe, his father (Samuel S. Hinds) has a fatal stroke, and his colleagues at the Building and Loan want George to run his father’s business. George is forced to postpone his dream in order to save the Building and Loan, the one organization in Bedford Falls that truly provides for the community.

Then when George plans to go to college he is once again forced to stay in Bedford Falls as the Building and Loan will be liquidated by the cruel and greedy Mr. Potter (Lionel Barrymore) if George were to leave. In a fiery speech, George defends the Building and Loan as the only organization keeping the people of Bedford Falls out of “Potter’s slums”.

George gives the money he was saving up to go to college to his brother Harry (Todd Karns) with the idea that when Harry finishes up his education he’ll come back to Bedford Falls and take the Building and Loan off of George’s hands. However, of course, that plan doesn’t pan out. When Harry returns to Bedford Falls he’s married and his wife Ruth’s father has offered Harry a job in research with a lot of potential. George, again out of his essential goodness, won’t let Harry turn down such an opportunity and is again stuck in Bedford Falls.

This cycle of hope and disappointment seems to be a permanent one for George. When he, newly-married, plans to finally see the world outside of Bedford Falls with his wife Mary (Donna Reed) for their honeymoon, he is once again foiled as he uses the $2000 he and Mary had saved to deal with his customers’ panic during a bank crisis.

Still, Capra doesn’t just subject the audience to scene after scene of George’s crushed dreams, he gives his protagonist small moments of happiness along the way to keep the audience hopeful that there is a brighter future ahead. The honeymoon scene with Mary in the old Granville house and the Building and Loan employees’ celebration after they keep the business alive during the bank crisis are just two examples of these moments of pure joy.

As George’s dreams move further and further away from becoming a reality, the lives of his friends and family are looking bright. His brother Harry wins the Congressional Medal of Honor due to his heroic actions as a pilot in World War II and his friend Sam Wainwright (Frank Albertson) struck it rich in the plastics business. Both of these were successes that George could’ve had if it wasn’t for his ear (George became deaf in one ear from saving Harry from drowning in a freezing lake) or his relationship with Mary (which he chose over investing in the plastics business with Sam).

From one perspective, it could seem like George is the unluckiest man alive and that’s the perspective that George starts to adopt as he gets close to the brink of suicide. To save him, George’s guardian angel Clarence (Henry Travers) comes down to Earth to show George how life would be in Bedford Falls if George didn’t exist. And in this world, Bedford Falls has become Potterville, a seedy town full of crime and nastiness. Of course, we as the audience already could see the impact that George had on his community. His kindness benefitted almost everybody that came into contact with him and as George’s guardian angel Clarence writes in a copy of the Adventures of Tom Sawyer: “no man is a failure who has friends”. 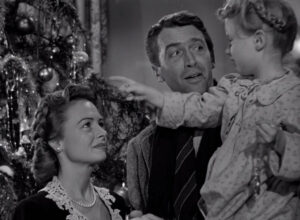 That’s the balance the film nails. Contrasting the unfortunate circumstances of George’s existence with the joys of life. Capra is not afraid to dig deep into George’s feelings of desperation and hopelessness. Jimmy Stewart really shines in these scenes as well and it’s hard to watch this dreamer so dejected. But because Capra and Stewart allow the audience to feel George’s desperation so powerfully by letting us walk with George every step of the way, we feel the final scene of pure unadulterated joy so impactfully. It’s a scene that truly can be called life-affirming but that’s only because we’ve been given a portrait of a real life, with both the good and the bad, the joy and the sorrow. Without the darkness that the filmmakers bring us to, the light wouldn’t be as bright and the film wouldn’t be the timeless masterpiece that it undoubtedly is.