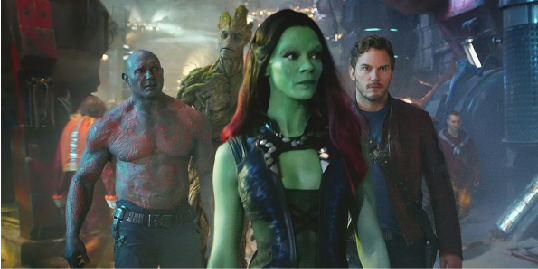 Posted at 07:23h in Lists by Awards Insights

75. Guardians of the Galaxy

Brash adventurer Peter Quill (Chris Pratt) finds himself the object of an unrelenting bounty hunt after stealing a mysterious orb coveted by Ronan (Lee Pace), a powerful villain with ambitions that threaten the entire universe. To evade the ever-persistent Ronan, Quill is forced into an uneasy truce with a quartet of disparate misfits-Rocket (Bradley Cooper), a gun-toting raccoon, Groot (Vin Diesel), a tree-like humanoid, the deadly and enigmatic Gamora (Zoe Saldana) and the revenge-driven Drax the Destroyer (Dave Bautista). But when Quill discovers the true power of the orb and the menace it poses to the cosmos, he must do his best to rally his ragtag rivals for a last, desperate stand-with the galaxy’s fate in the balance. (Walt Disney)

74. Blue is the Warmest Color

Adèle’s (Adele Exarc life is changed when she meets Emma, a young woman with blue hair, who will allow her to discover desire and to assert herself as a woman and as an adult. In front of others, Adèle grows, seeks herself, loses herself, and ultimately finds herself through love and loss. (IMDb)

Directed by: Anthony and Joe Russo

After the devastating events of Avengers: Infinity War (2018), the universe is in ruins. With the help of remaining allies, the Avengers assemble once more in order to reverse Thanos’ actions and restore balance to the universe. (IMDb)

Twin siblings uncover a shocking family secret after they agree to their mother’s dying wish: to locate the father they thought was dead, and a brother they never knew existed. (Amazon)

Directed by: Joel and Ethan Coen

INSIDE LLEWYN DAVIS follows a week in the life of a young folk singer as he navigates the Greenwich Village folk scene of 1961. Guitar in tow, huddled against the unforgiving New York winter, he is struggling to make it as a musician against seemingly insurmountable obstacles-some of them of his own making. (CBS)

Thirty years after the events of the first film, a new blade runner, LAPD Officer K (Ryan Gosling), unearths a long-buried secret that has the potential to plunge what’s left of society into chaos. K’s discovery leads him on a quest to find Rick Deckard (Harrison Ford), a former LAPD blade runner who has been missing for 30 years. (Warner Bros.)

The film focuses on the relationship between the Alabama’s commanding officer, Captain Richard Phillips (Tom Hanks), and the Somali pirate captain, Muse (Barkhad Abdi), who takes him hostage. Phillips and Muse are set on an unstoppable collision course when Muse and his crew target Phillips’ unarmed ship; in the ensuing standoff, 145 miles off the Somali coast, both men will find themselves at the mercy of forces beyond their control. (Sony Pictures)

On the occasion of his fifth wedding anniversary, Nick Dunne (Ben Affleck) reports that his beautiful wife, Amy (Rosamund Pike), has gone missing. Under pressure from the police and a growing media frenzy, Nick’s portrait of a blissful union begins to crumble. Soon his lies, deceits and strange behavior have everyone asking the same dark question: Did Nick Dunne kill his wife? (20th Century Fox)

67. Once Upon a Time in Anatolia

In the dead of night, a group of men – including a police commissioner, a prosecutor, a doctor and a murder suspect – drive through the tenebrous Anatolian countryside, the serpentine roads and rolling hills lit only by the headlights of their cars. They are searching for a corpse, the victim of a brutal murder. The suspect, who claims he was drunk, can’t remember where he buried the body. As the night draws on, details about the murder emerge and the investigators’ own secrets and hypocrisies come to light. In the Anatolian steppes, nothing is what it seems; and when the body is found, the real questions begin. (The Cinema Guild)

In a future where mutants are nearly extinct, an elderly and weary Logan (Hugh Jackman) leads a quiet life. But when Laura (Dafne Keen), a mutant child pursued by scientists, comes to him for help, he must get her to safety. (IMDb)

BIRDMAN or The Unexpected Virtue Of Ignorance is a black comedy that tells the story of an actor (Michael Keaton) – famous for portraying an iconic superhero – as he struggles to mount a Broadway play. In the days leading up to opening night, he battles his ego and attempts to recover his family, his career, and himself. (Fox Searchlight)

Matthew McConaughey stars in DALLAS BUYERS CLUB as real-life Texas cowboy Ron Woodroof, whose free-wheeling life was overturned in 1985 when he was diagnosed as HIV-positive and given 30 days to live. These were the early days of the AIDS epidemic, and the U.S. was divided over how to combat the virus. Ron, now shunned and ostracized by many of his old friends, and bereft of government-approved effective medicines, decided to take matters in his own hands, tracking down alternative treatments from all over the world by means both legal and illegal. Bypassing the establishment, the entrepreneurial Woodroof joined forces with an unlikely band of renegades and outcasts – who he once would have shunned – and established a hugely successful “buyers’ club.” Their shared struggle for dignity and acceptance is a uniquely American story of the transformative power of resilience. (Focus Features)

Towards the end of colonial India, Shahid Khan (Jaideep Ahlawat) loots the British trains, impersonating the legendary Sultana Daku. Now outcast, Shahid becomes a worker at Ramadhir Singh’s colliery, only to spur a revenge battle that passes on to generations. At the turn of the decade, Shahid’s son, the philandering Sardar Khan (Manoj Bajpayee) vows to get his father’s honor back, becoming the most feared man of Wasseypur. (Studio 18)

Brad Pitt stars as Billy Beane, the general manager of the Oakland A’s and the guy who assembles the team, who has an epiphany: all of baseball’s conventional wisdom is wrong. Forced to reinvent his team on a tight budget, Beane will have to outsmart the richer clubs. The onetime jock teams with Ivy League grad Peter Brand (Jonah Hill) in an unlikely partnership, recruiting bargain players that the scouts call flawed, but all of whom have an ability to get on base, score runs, and win games. It’s more than baseball, it’s a revolution – one that challenges old school traditions and puts Beane in the crosshairs of those who say he’s tearing out the heart and soul of the game. (Sony Pictures)

The film boasts a magnificent screenplay from a dream duo of Steven Zaillan (Schindler’s List, The Irishman) and Aaron Sorkin (The Social Network, Steve Jobs), and for any lover of sports analysis and statistics, this is the movie for you.

Mads Mikkelsen won the Best Actor Award at the 2012 Cannes Film Festival for his penetrating portrayal of Lucas, a former school teacher who has been forced to start over having overcome a tough divorce and the loss of his job. Just as things are starting to go his way, his life is shattered when an untruthful remark throws his small community into a collective state of hysteria. As the lie spreads, Lucas is forced to fight a lonely fight for his life and dignity. (Magnolia)

NIGHTCRAWLER is a pulse-pounding thriller set in the nocturnal underbelly of contemporary Los Angeles. Jake Gyllenhaal stars as Lou Bloom, a driven young man desperate for work who discovers the high-speed world of L.A. crime journalism. Finding a group of freelance camera crews who film crashes, fires, murder and other mayhem, Lou muscles into the cut-throat, dangerous realm of nightcrawling — where each police siren wail equals a possible windfall and victims are converted into dollars and cents. Aided by Rene Russo as Nina, a veteran of the blood-sport that is local TV news, Lou thrives. In the breakneck, ceaseless search for footage, he becomes the star of his own story. (Open Road)

SELMA is the story of a movement. The film chronicles the tumultuous three-month period in 1965, when Dr. Martin Luther King, Jr. led a dangerous campaign to secure equal voting rights in the face of violent opposition. The epic march from Selma to Montgomery culminated in President Johnson (Tom Wilkinson) signing the Voting Rights Act of 1965, one of the most significant victories for the civil rights movement. Director Ava DuVernay’s SELMA tells the real story of how the revered leader and visionary Dr. Martin Luther King Jr. (David Oyelowo) and his brothers and sisters in the movement prompted change that forever altered history. (Paramount)

Thirteen-year-old Kayla (Elsie Fisher) endures the tidal wave of contemporary suburban adolescence as she makes her way through the last week of middle school—the end of her thus far disastrous eighth grade year—before she begins high school. (A24)

Three decades after the Empire’s defeat, a new threat arises in the militant First Order. Defected stormtrooper Finn (John Boyega) and the scavenger Rey (Daisy Ridley) are caught up in the Resistance’s search for the missing Luke Skywalker (Mark Hamill). (IMDb)

Ethan Hunt (Tom Cruise) chooses to save his team over completing a mission, allowing stolen plutonium to fall into the wrong hands. Now, he must partner with a hard-hitting CIA agent (Henry Cavill) in a race against time to stop a nuclear threat. (Amazon)

Early 18th century. England is at war with the French. Nevertheless, duck racing and pineapple eating are thriving. A frail Queen Anne (Olivia Colman) occupies the throne and her close friend Lady Sarah Churchill (Rachel Weisz) governs the country in her stead while tending to Anne’s ill health and mercurial temper. When a new servant Abigail Masham (Emma Stone) arrives, her charm endears her to Sarah. Sarah takes Abigail under her wing and Abigail sees a chance at a return to her aristocratic roots. As the politics of war become quite time consuming for Sarah, Abigail steps into the breach to fill in as the Queen’s companion. Their burgeoning friendship gives her a chance to fulfill her ambitions and she will not let woman, man, politics or rabbit stand in her way. (Rotten Tomatoes)

SING STREET takes us back to 1980s Dublin seen through the eyes of a 14-year-old boy named Conor (Ferdia Walsh-Peelo) who is looking for a break from a home strained by his parents’ relationship and money troubles, while trying to adjust to his new inner-city public school where the kids are rough and the teachers are rougher. He finds a glimmer of hope in the mysterious, über-cool and beautiful Raphina (Lucy Boynton), and with the aim of winning her heart he invites her to star in his band’s music videos. There’s only one problem: he’s not part of a band…yet. She agrees, and now Conor must deliver what he’s promised – calling himself “Cosmo” and immersing himself in the vibrant rock music trends of the decade, he forms a band with a few lads, and the group pours their heart into writing lyrics and shooting videos. (Likely Story)

Seasoned musician Jackson Maine (Bradley Cooper) discovers-and falls in love with-struggling artist Ally (Lady Gaga). She has just about given up on her dream to make it big as a singer – until Jack coaxes her into the spotlight. But even as Ally’s career takes off, the personal side of their relationship is breaking down, as Jack fights an ongoing battle with his own internal demons. (Warner Bros.)

Jong-su (Ah-in Yoo) bumps into a girl (Jong-Seo Jun) who used to live in the same neighborhood, who asks him to look after her cat while she’s on a trip to Africa. When back, she introduces Ben (Steven Yeun), a mysterious guy she met there, who confesses his secret hobby. (

51. The Wolf of Wall Street

From the American dream to corporate greed, Jordan Belfort (Leonardo DiCaprio) goes from penny stocks and righteousness to IPOs and a life of corruption in the late 80s. Excess success and affluence in his early twenties as founder of the brokerage firm Stratton Oakmont warranted Belfort the title “The Wolf of Wall Street.” (Paramount)